When Your Mom Is Not a Good Mom

April 04, 2017
They are everywhere on social media, those sentimental memes about mothers. But because I was  abused, to me they read like my worst nightmare: 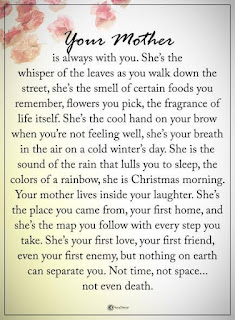 My mother actually does stalk me. I cut off contact with my mother over ten years ago because I did not feel safe, and because I decided it was more important to protect my child from her manipulative behavior. Whenever I move, she finds my address. She will send cards to my children, acting as if everything were normal. Two of them were born after I cut off contact, yet she knows their names and when they were born. She will not engage directly with me, or address any of the issues, but she will let me know she is there attempting to control me. Recently she sent me an email with "Urgent -Response Needed" in the headline. It was not urgent. It did not need a response. It was an attempt to manipulate me once again. "Hoovering" is the term, borrowed from the vacuum cleaner, whereby a person tries to suck people in to their drama. She does not ever express any remorse over what happened, because to her, the problem never existed. In her eyes, if there was a problem, surely it wasn't that big a deal, and surely it was my fault.

I spent the first thirty years of my life exhausting every possible way to be a good girl and play nice. I used to think it was my fault that the relationship was dysfunctional. I had been trained since birth to take responsibility for their feelings and behaviors. I was hypervigilant about empathy, yet never once was empathy reciprocated.

For too long I've held on to guilt.  If I admit that I did not have a good mother, I would be perceived as ungrateful. A complainer. A victim. I am so used to taking responsibility for the faults of others that my default coping skill is to remain silent. Even now, the worry that I would be perceived as being negative about my mother makes me hesitate.  My motives aren't  to be mean or get revenge. My motive is simply to tell the truth. My motive is to let go of a burden I've carried too long.

My motive is also to start a conversation for those who also see the meme above as a horror movie synopsis. Here is a place you will be heard and understood.